skip to main | skip to sidebar

Yes, I know I've been home for a week. Life has been crazy this week and I haven't had time to sit down at the computer to post the pictures I want to post. ;) And the after: 2 views as well: Yes, these were taken on different days. I forgot to have my friend take a picture when she was done cutting and I kept forgetting to ask DH to do it when it looked good. I like it b/c it's short, but I don't like the style. So I am going on Wednesday to someone else (friend lives almost 3 hours south and not going "home" anytime soon) to have her chop it some more. There is too much on the sides and it's still too long for what I want. When my friend cut it, I didn't know if it was short enough or not and she went on vacation right after she cut mine so I didn't have time for her to do it again while I was at my mom's. Since I've had time to wash it and fix it several times, I don't like it. So it's going shorter! I'll post new pics if I get what I want on Wednesday.


Speaking of Wednesday...that's when this little guy starts daycare. :( No, mommy is not happy about it, BUT I have no other option. And my first one survived it (he still goes there and LOVES it). I go back to work on the 14th but wanted to send him for a day before that to get him used to it. He will only go 2 days a week and big brother will still go 3. As far as stats go on little Izaac...well he's not so little! As of Wednesday, he was 13# 12.6 ounces, 23.75" long. BIG BOY!!! The picture was taken on his 2 month birthday. I can't believe it's been 10 weeks already! But he's always talking and cooing and smiling at us. He's such a blessing!

That's all for now. I need to post about how OFF program I've been since my mom's, but I won't. I did learn one thing while down there...I'll never move back! ;) That and boredom + stress = bad eating for Amanda. 'Nuff said. ;)
Posted by Amanda at 7:54 PM

Oh, how tough it must be to send a little one off to daycare. Very cute picture of the little man!

I like the shorter hair, very sporty! It'll be interesting to see what you do next.

Ah, you totally got the wife chop! Very cute. :)

I love the hair! So cute and summerish! can't wait to see the new pics. Izaac is adorable. Oh my, I miss those days.

Amanda
Plainfield, Indiana, United States
I'm a 31 year old wife and mother of 2 boys who is trying to get her body back and even better than it was before. This is my struggle to get there... my life...in a blog! 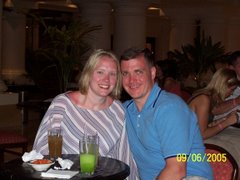